I've had an Apple TV for several years now. I often use AirPlay to beam stuff from my Apple gadgets to my Apple TV. With one finger tap I can push movies and music stored on my Mac, iPhone, or iPad to my big screen.

I see now that AirPlay is a lot more open now than it used to be. App developers and online video sites now have the option to incorporate AirPlay. It's come a long way from AirPlay for iTunes-sanctioned content only. 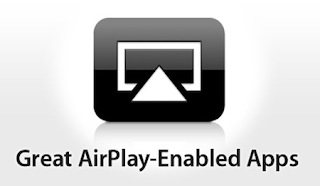 
Streaming HD video from an iPad to an HDTV is done in the background. That's right you can switch over to the Facebook app while the video continues playing. That’s because AirPlay works in the background, continuing to stream media remotely while you do other things. You can even put the iOS device to sleep; so long as it’s got power and a network connection, it’ll keep streaming.

Of course you can control AirPlay playback from the iOS device, but once the streaming starts, you can also just pick up the Apple TV’s remote and control things that way. Once an AirPlay stream is going, it’s not any different from watching a movie on the Apple TV directly. All the basic Apple TV remote commands work, so you can play, pause, fast-forward, and even bring up a chapter list, also skip forward.

The Apple TV buffers as much of the streamed file as it can, this should give you smooth fast-forwarding.

If the app doesn't support airplay directly there is always AirPlay Mirroring - a fantastic feature of iOS on the iPad. It lets you mirror your iPad screen, and everything that you do on it, to an Apple TV or a Mac computer.
Posted by Unknown at Sunday, April 14, 2013

Email ThisBlogThis!Share to TwitterShare to FacebookShare to Pinterest
Labels: technology